Embedded sensors and device connectivity increase the need for EMC simulation and verification.

The Future of Design
DE readers provide a glimpse of their technology usage in our annual survey.
Transporting PLM to the Cloud
Cloud-based PLM can provide the flexibility and accessibility needed for digital transformation.
PLM: Obsolete Technology or Work in Progress?
As data usage expands, PLM platforms must evolve to support new types of data and...
Compact Rugged Computers from OnLogic Enable IoT and Edge Computing
The OnLogic Karbon 400 Series leverages the Intel Atom x6000E Series CPUs in a pair...
More Internet of Things

By the latest count of the International Telecommunication Union (ITU), the UN agency for IT and communications technology (ICT), the world’s roughly 7 billion people were connected via 6.9 billion cellular subscriptions in 2014 (“Key 2005-2014 ICT Data for the World,” published by ITU). The developed world accounts for 5.4 billion devices, and the developing world 1.4 billion. Regardless of the uneven distribution, the device density suggested by ITU’s statistics is astounding. Inevitably, the electromagnetic transmissions from hundreds of smartphones will come in close contact and possibly clash with one another.

Remcom, formed in 1994 by Raymond Luebbers and his graduate students H. Scott Langdon and Christopher Penney, creates electromagnetic simulation software with an emphasis on handling large, complex problems and fast calculations via GPU (graphics processing unit) acceleration. “Generally speaking, if you put two cellphones next to each other, you do not want the electromagnetic energy from cellphone A’s circuitry to interfere with cellphone B’s operations. You want both to work. EMC (electromagnetic compatibility) is about measuring, testing and setting limits on the energy and transmission from the devices,” says Jeff Barney, product marketing manager at Remcom.

“With miniaturization of connected devices, EMC concerns increase dramatically, because now you have to take into account the clash factors both internally on the device itself, and externally with other devices,” says Humair Mandavia, executive director of the Zuken SOZO Center.

One of the challenges for design engineers in the age of the Internet of Things (IoT) will be to teach their devices to confine their electromagnetic energy to their own personal spaces—a task made harder by a lack of expertise.

Playing by the EMC Rules

In 1994, after completing his Ph.D. at the University of Stellenbosch, South Africa, Gronum Smith co-founded EM Software & Systems, a consultancy firm that focuses on electromagnetic-related problems. Realizing the fast growing need for EM simulation, they started working with Dr. Ulrich Jakobus on the code for FEKO software. By December 2013, FEKO’s popularity caught the attention of Altair Engineering, a simulation software developer. So a deal was struck: Altair would buy 100% of EM Software & Systems. Smith is now Altair’s country manager for South Africa and Jakobus is VP of Electromagnetic Solutions.

“Sensitive electronic equipment, which may or may not have intentional receiving capabilities, are highest on the susceptibility list,” says Smith. “For example, high-power radars can damage sensitive electronic warfare (EW) receivers, which are used to listen to enemy communications. Mobile phones are, due to their high mobility and uncontrolled use, potentially dangerous where they can interfere with, say, medical equipment, navigation systems (of aircraft), control systems and radios. Immunity to lightning and other EM pulses is often an industry requirement in, for example telecommunication masts, ship masts, buildings and aircraft.”

This realization has prompted governments, industry leaders and regulatory institutions to set up some rules about how transmission-capable devices should behave around one another. You may have noticed the CE label inscribed on the back of wireless mice, smartphones and Bluetooth devices. The marking indicates the device complies with the EMC directive set by the Conformité Européenne, required for selling in the European Union countries. “That CE label assures you that, at a certain frequency range, the device’s electromagnetic emissions are below the threshold set by the CE regulatory body,” says Remcom’s Barney.

In addition to safety concerns, running afoul of government regulations concerning EMC can be expensive. For example, last month U.S. Department of Transportation’s Federal Aviation Administration (FAA) proposed a $900,000 civil penalty against Alaska Airlines, Inc. According to a statement from the FAA, it alleges that the airline installed systems to pulse external aircraft lights “without conducting required ground and flight tests to determine whether the systems caused electromagnetic radio frequency interference with aircraft radios, navigational systems, or other electronic equipment.”

Zuken’s 3D PCB (printed circuit board) design software CR-8000 and CR-5000, for example, include a feature called EMC Advisor, which gives users a way to conduct rule-based probes of signal integrity and shield structure effectiveness, among others. It’s aimed at non-experts, according to the company.

“You may have EMC experts who are doing simulation and analysis, working with other gurus,” says Zuken’s Mandavia. “But the time required to do that kind of validation affects your lead time. With [EMC Advisor], anybody—PCB designers to engineers—can run some tests based on experts’ guidelines and rules. So you can, for example, spot that traces are going over a split plane, and get feedback on how to fix it.” For the more advanced EMC simulation, Zuken partners with ANSYS, CST, AWR and other developers who specialize in the field.

For example, CST EMC STUDIO is a product for EMC and EMI analysis that was launched earlier this year. According to the company, engineers can use the product to “study effects such as radiated or conducted emissions in consumer electronics devices, or susceptibility to electrostatic discharge, lightning strike and high-intensity radiated fields.”

“Sometimes, the person in charge of EMC is treating the problem like a mechanical engineering problem, whereas it really should be treated like an antenna issue, because that’s what emission is,” Remcom’s Barney says. “To analyze EMC, you need a solver that is specific to electromagnetics. These solvers look at radiation at various frequencies—different from solvers for thermal, structure, stress and strain, or heat transfer calculation.” 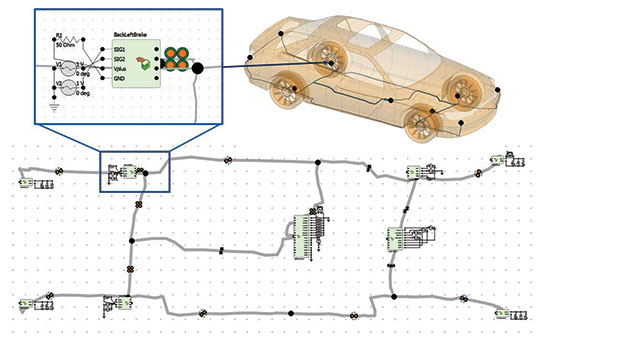 Analyzing cable harness and connected circuits in an automobile with Altair’s FEKO. Image courtesy of Altair.

One example of how vendors are making specialized EM simulation available to generalists can be seen the ANSYS Electronics Desktop, which was part of the January release of ANSYS 16.

“This single-window, highly integrated interface brings electromagnetic, circuit and systems analysis into a seamless working environment to maximize productivity and to ensure users are following simulation best practices,” according to the company.

It features ANSYS HFSS software for simulating 3D full-wave electromagnetic fields and what the company says is the industry’s first 3D electromagnetic component library. Users can create 3D components to share with colleagues and/or integrate them into larger electronic assemblies.

Software products developed for EMC simulation and testing can all be traced back to a handful of leading EMC solvers, belonging to either time domain or frequency domain, according to Barney. Remcom’s XFdtd, for example, is based on the finite-difference time-domain method (hence, the acronym FDTD).

Usually EMC simulation begins (just like fluid or thermal simulation) with a CAD model. The geometry, in this case, will most likely be a detailed view of the circuitry, along with the screens and buttons it interacts with. The source CAD model may come from a combination of mechanical and electrical CAD assemblies. Because the types of conductive materials determine electromagnetic energy behavior, engineers need accurate material data (crucial values are permittivity and conductivity) to simulate the scenarios.

Running the simulation is the easy part, but tracking down the material data and compliance information proves much more difficult. “For example, if you purchase a certain type of plastic from a supplier, you may not know the electromagnetic properties of that plastic,” says Barney.

“Some suppliers consider [material information] their intellectual property. Some treat it as sensitive data. Some think of it as their secret sauce, which lets them control their costs. So if you’re trying to do a system-level simulation with multiple supplier components, getting that information could be difficult,” says Mandavia.

If a product fails upon EMC testing, the next challenge is to identify a fix. The most common fixes are to reconfigure the circuitry layout to weaken resonances, improve shielding structures to contain the radiation, or redesign the grounding structure (to ensure good return paths). All these are worth considering, but identifying the magical combination of these approaches could be something of a black art, Barney notes. “Sometimes, our customers have an experienced engineer who instinctively knows the right fix,” he says.

In the absence of such an EMC wizard, many rely on the ability to try out different combinations of fixes using simulation software. Still, the number of iterations you need to simulate to arrive at the best approach is not to be underestimated.

“Because the frequencies or the source of emission might not be known, it is necessary to cover a very broad spectrum, which in turn requires simulations at many frequencies or many time steps for time-domain simulations,” says Altair’s Smith. “Not only is it necessary to simulate individual components, which can be complex in itself, but the more challenging problem is simulating the complete assembly, including connection of several devices through cables. Although engineers aim to simplify and solve only the essential components and structures, these can still be very challenging to validate: for example, cable bundles supporting several circuits and devices in a car. The simulation and data processing time can become prohibitively long if many configurations have to be considered.”

No Replacement for Real-World Tests

The IoT Gold Rush—the move to integrate wireless transmission, circuitry and sensors into everyday household items and consumer goods to make them appealing—is expected to increase the demand for EMC simulation.

“As you create more of these transmission devices, you’ll have a greater need to make sure they comply with local standards,” says Barney. But he cautions that “simulation is a design tool that is accurate enough to predict whether or not you’ll pass the test. But at the end of the day, you still must go out and run the test to become certified.”

“Although EM simulations would not replace the need for [real-world] measurements, their analytical use plays a major part in reducing the cost of obtaining EMC compliance,” says Smith.