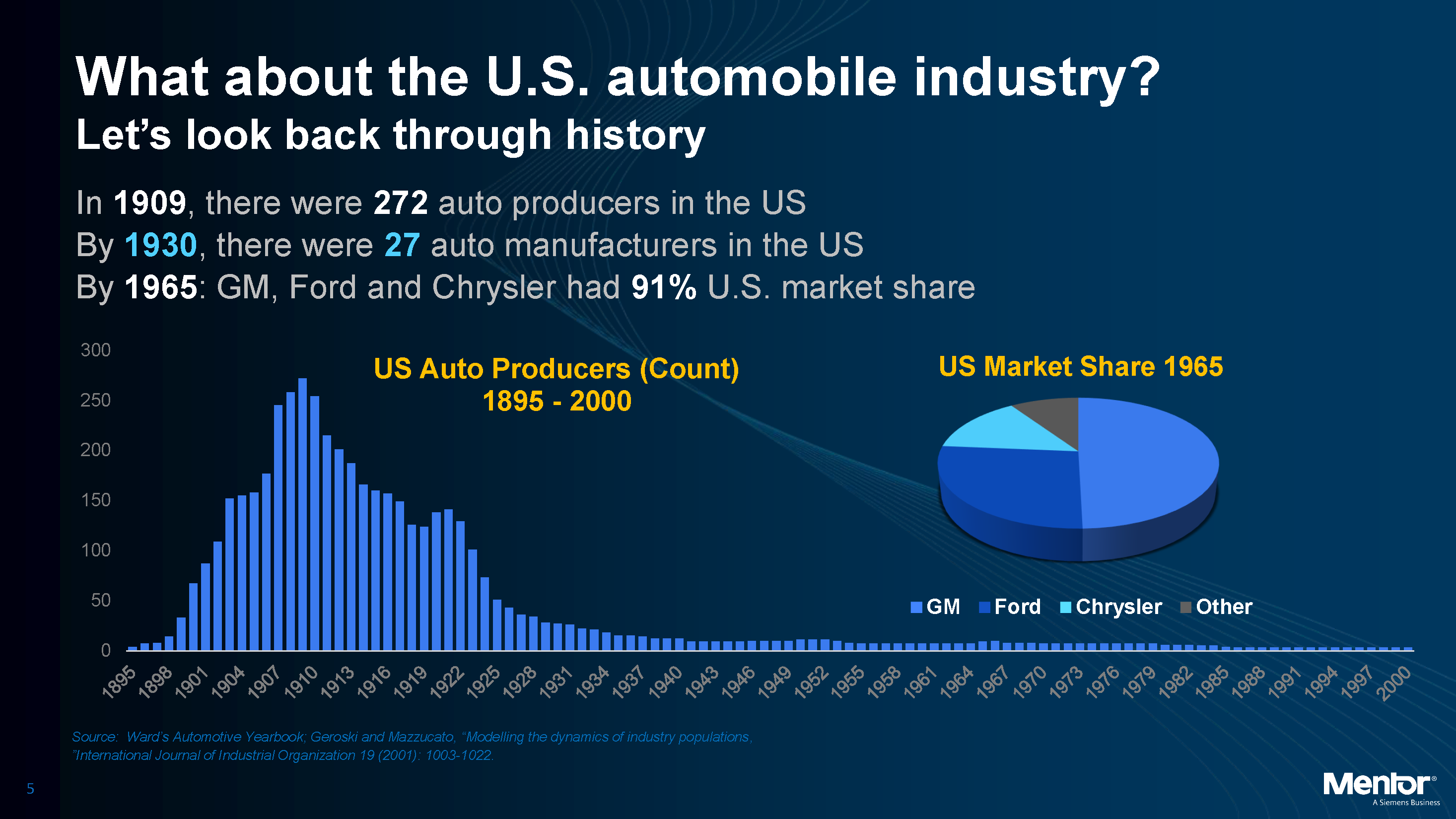 Today’s automotive market is pretty evenly distributed, according to Rhines, but that wasn’t always the case. Image courtesy of Mentor, a Siemens Business.

“Whenever there is a major technical discontinuity, there is opportunity for new entrants and there is risk for the establishment,” said Mentor CEO Wally Rhines from the stage of the Integrated Electrical Solutions Forum (IESF) Automotive, on September 20 in Plymouth, MI. The automotive industry is indeed in the midst of “discontinuity,” thanks to consumer demand for what amounts to a connected computer on wheels, new electric drivetrains and the rapid advancement of assisted to autonomous driving technology. But Mentor, too, is is looking for opportunity in disruption as it integrates with Siemens PLM Software, which acquired the company this year to extend its digitalization efforts. 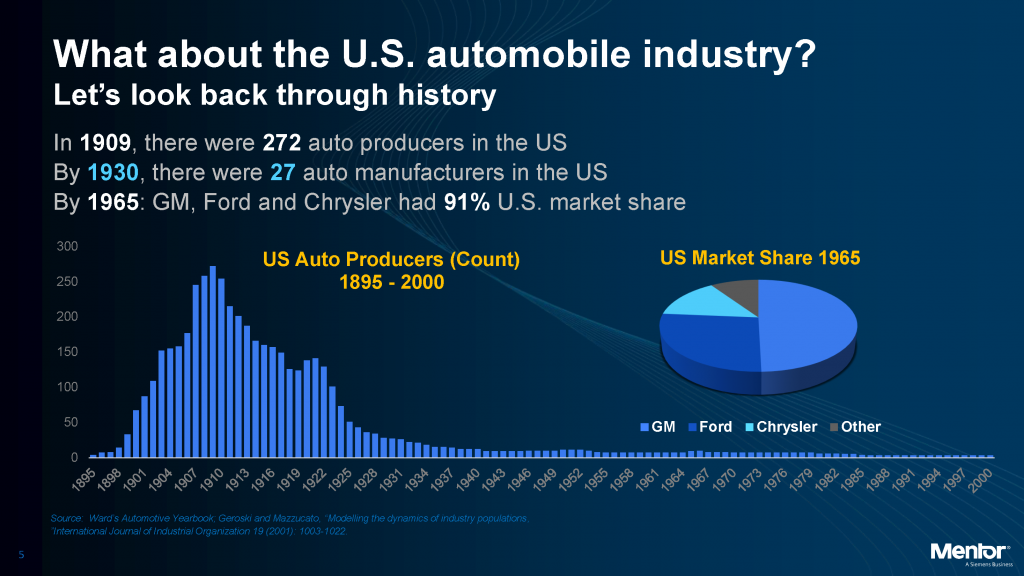 Today’s automotive market is pretty evenly distributed, according to Rhines, but that wasn’t always the case. Image courtesy of Mentor, a Siemens Business.

To make his point, Rhines looked back at the beginning of the auto industry, when almost 300 companies rushed to take advantage of the disruption in the transportation market and compared it to the 300 companies now developing electric cars and trucks, and the almost 100 companies that have announced autonomous driving programs. Rhines’ point was clear: Only a few companies will survive the current disruption, and those with the most efficient electronic engineering tools will have a distinct advantage.

Technology companies like Apple, Google, Tesla, Microsoft, Amazon, IBM and Samsung have all become more active in the automotive industry. These companies often have different design methodologies—guided by their roots in electronics and software development—than traditional automotive engineers. That agile design and development mindset could serve them well as competition heats up.

“Throughout history, as I’ve observed it, people do not change their methodology for design unless they have to,” said Rhines, recalling his decades in the semiconductor industry, beginning in the early ‘70s. “So if they have something that works, they keep doing it. Our industry continues to come in with things that are much more efficient, faster, better and so on, but there is a strong reluctance to adopt until the system you’re using stops working and then you have to adopt. That’s what happened in the semiconductor industry. The complexity of chips grew at such a level that it wasn’t just difficult to do it the old way, it was impossible. So you had to adopt automation.” 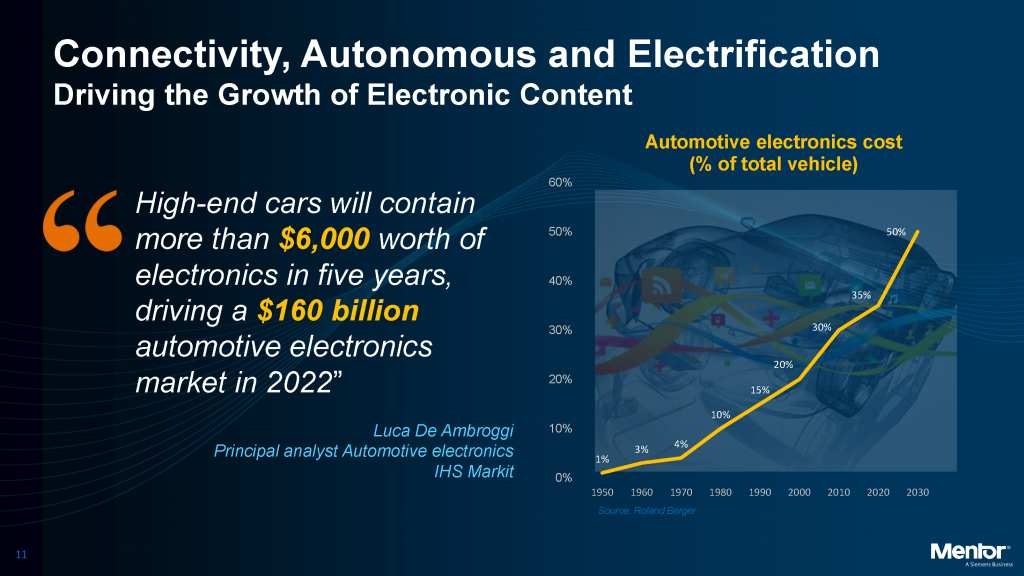 The amount of electronics used in automobiles has skyrocketed, according to analysts, and is expected to continue its steep ascent. Image courtesy of Mentor, A Siemens Business.

Looking ahead, Rhines sees the complexity of system design following that same path. We already have design software packages that incorporate generative design and optimization features. In Rhines’ view, what are now thought of as nice-to-have, time-saving features that allow software to suggest potential designs could soon become the defacto method for designing complex systems. He estimates that about 20% of the electronic distribution systems in automobiles are done generatively today, and the other 80% still have a lot of manual intervention. 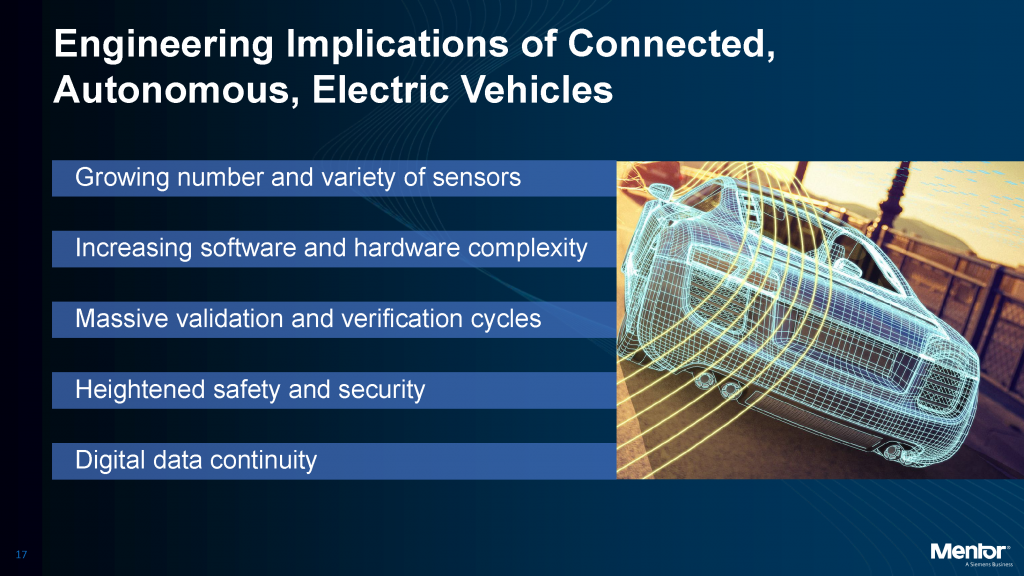 “I believe virtualization will determine the winners for system design,” Rhines said. “Electrification and autonomous driving will accelerate that process, because it will be impossible not to adopt virtual design for a far greater percent of the design and verification process of vehicles in the future.”