RAPID 2016: An Industry of Opportunity

This year's event addresses the latest technologies and a look at the future of additive manufacturing.

This week, the Orange County Convention Center in Orlando housed everything additive manufacturing. As an attendee, you were able to find any type of system, software, material and accessory in the exhibit hall. The show floor was enhanced by a host of courses and presentations of various design techniques, applications and 3D printing industry topics. Ultimately, RAPID gave the engineering community a look at an industry that is paradoxically well established and brand new.

“We are entering an age of innovation in 3D printing,” said Todd Grimm, president of T. A. Grimm & Associates, as part of his kick-off presentation.

As an indication of just how fast the industry is growing, Grimm said he had to limit his keynote to cover only new technology released within the past six months, hardware and support systems priced at over $5,000, as well as items that are either already commercially — with a few exceptions of course. Overall, Grimm noted that the industry is seeing systems that are going bigger, faster. “The [bigger] trend has been going on for a long, long time. We’re going from the desktop, consumer-oriented machines getting bigger and pushing into the professional world,” he said.

This trend ties into the larger industry push to bring additive manufacturing into the spotlight as a means of full-use production, a topic that’s been at the center of discussion by AM experts for some time. “Additive is a different, new technology, yet it’s the same in many ways when you talk about transitioning it to production. We still care about part-to-part variation and locking down the same geometry every time,” said Barbara Negroe, advanced manufacturing initiatives, additive manufacturing at GE. “GE transitions parts to production every day and it’s still hard. Even with a technology that you have some familiarity with.” 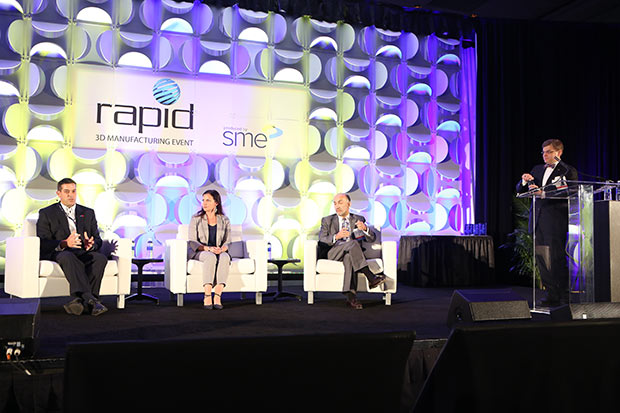 The first panel at RAPID 2016 discussed bringing additive manufacturing from a prototyping technology to production. Image courtesy of SME.

But implementing AM successfully isn’t just about the hardware itself. “It’s not necessarily just technology development that matters. What matters is capability development,” says Kevin Creehan, deputy director of Technology Transition at America Makes. “It’s all of the ancillary things that support the additive technology that has made what GE and others have done successfully as unique as it is.”

When implementing additive, it’s important to recognize that it can have multiple effects throughout an organization. Looking at it like an ecosystem is one path toward success. Distinguishing the technology’s limitations is also necessary.

“We are at the height of the hype curve right now,” said Leo Christodoulou, director, Engineering Structures and Materials Technology at Boeing. “And any one of you and any one of us, we bear the responsibility not to overhype it. One misstep from any one of us, one incident, and the technology will be set back 10 years.”

While over 250 exhibitors showcased their latest and greatest developments, attendees also saw announcements and product releases from industry giants. The two major announcements came from HP and Stratasys, targeting both hardware and software.

In October of last year, HP solidified its entrance into the 3D printing market with an event promising to tackle some of the main issues with additive manufacturing systems: speed and material quality. After months of development, the company officially debuted its Multi Jet Fusion Portfolio. HP claims it is a production-ready system that can produce prints 10x faster and at the voxel level with its fusing and detailing agents. The company also announced that conductive agents will be available, letting users print electronics within their parts. The Multi Jet Fusion systems are slated to release later this year or early next year.

Stratasys promoted its developments since acquiring GrabCAD by introducing GrabCAD Print software designed to bridge the gap between software and 3D printing hardware. “The reality is what you see on a screen in CAD is not [always] what comes off the printer,” said Paul Giaconia, vice president of Software Products and Strategy at Stratasys. “While other parts of manufacturing have evolved over the last 30 years to take advantage of CAD data directly to generate machine strategies directly from the model, additive manufacturing has not.” The program is currently in private beta, and will be released for public beta later this summer.

Ultimately, both of these announcements focused on several pain points associated with additive manufacturing: print speed and accessibility. Even with all the advancements over the past several decades, engineers and additive manufacturing companies still need to find ways to address the 3D printing learning curve.

“Current designers have always kind of done things the same way, but these technologies for 3D printing are changing that rapidly,” said Dean Bartles, chief manufacturing officer and executive director at the Digital Manufacturing & Design Innovation Institute (DMDII). To address this change, Bartles said DMDII is working to help train the next generation of engineers on how to take advantage of these technologies in their work.

Addressing more manufacturing disruption, SME hosted several panels on the digital revolution and its integration with manufacturing technologies. “The megatrend is digitization. All industries are going digital,” said Steven Nigro, head of 3D printing at HP. “And additive manufacturing is currently based on 1s and 0s.”

This binary structure can help serve what is known as the digital thread — an infrastructure to help collect data all throughout the design and production process. “As you’re producing parts [with digital manufacturing], you’re learning more and more about how that part is made,” said Bartles. “That’s additional intelligence about that part that you’re gathering along the process. So by the time that individual product rolls off the production line, you have a tremendous amount of information of how that part was designed and how that part was produced.” 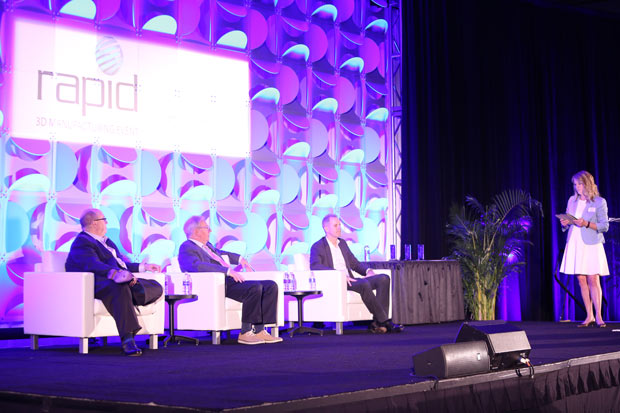 Though even with this growing trend in digital data collection, panelists did acknowledge cybersecurity concerns. Bartles sees a lot of small- to mid-sized businesses being wary of connecting their machines to the cloud for data collection. It’s also something enterprises such as GE are addressing to ensure protection of their intellectual property (IP). But, according to Bartles, there’s still a lot of work to be done when it comes to cybersecurity, specifically for AM. Ultimately, the goal is to figure out how to secure all the sensors and other data-streaming components on manufacturing machines.

In the Spirit of Teamwork

RAPID also focused on the idea of collaboration. Even with all the technological advancements, it’s important for the industry to face the challenges brought by AM together. “We’re all learning at the same time,” said Negroe. “We have some people teaching us and us teaching them.”

In past decades, additive manufacturing hardware and software companies released proprietary solutions. The evolution of AM technology — especially as it is pushed as a method of manufacturing full-scale parts — calls for a new set of design tools, machines and an improved user experience. Without accessibility, the adoption of AM will surely slow down.

“Open architecture and collaborating as an industry [is key],” said Bryan Crutchfield, vice president and general manager of Materialise North America. “All of the specific CAD packages have their strengths and weaknesses, and all the OEMs on the machine side have their strengths and weaknesses. At various times, some are more appropriate than others, and it’s important that users are able to plug and play the pieces that they need.”

One example of collaboration comes from HP. As part of its 3D printing portfolio debut, HP announced a collaboration with Siemens to develop a next-generation set of design tools. The goal is to develop a software program to help engineers input data from CAD/CAE/PLM programs.

Going forward, “we need a way to communicate,” Boeing’s Christodulou said. “There’s a lot of opportunity for collaboration across competitors.”